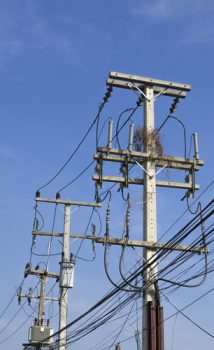 What is your community’s goal for a broadband network?

Although you are endeavoring to build the network of the future, the construction techniques used to build it are the same ones that ones that have been used for years – in most communities this means installing new fiber cables on existing poles in the public rights-of-way and on easements. Burying the entire fiber network directly or in conduit protects it from weather risk such as ice and wind, but construction cost and time factors dictate that most networks use the existing aerial infrastructure. In most communities, 70% or more of the new fiber broadband network will likely be aerial.

How do you obtain the rights to install new fiber on poles another company owns – what are pole attachment agreements?

The first step your community or any other entity that seeks to attach to the poles owned by another company requires that an application be submitted to the pole owner. Without going into the specific details, the Kentucky Public Service (PSC) regulates the rates, terms, and conditions for pole attachments. The PSC also has jurisdiction to settle pole attachment traffic disputes. The PSC provides a means for new entities to attach to the poles owned by others.

After the pole attachment agreement has been completed, what’s next?

Now that you have an attachment agreement you can start building your network by just hanging the new fiber cable on the existing poles, right? In theory, yes, but remember many of the poles have in place for 20 years or longer. First the electric company installed the power cables, then the telephone installed the telephone cable and then maybe one or two more cables over time as demand grew. Next the cable company installed its cables. The proper spacing between cables and equipment on poles is governed by electric and safety codes as indicated in the figure below. Before you can attach the new fiber cable to a high percentage of the poles, the other equipment and cables will need to be rearranged to ensure proper spacing has been maintained and, in some cases, a new, a taller pole may need to be installed. This process is called “make-ready” work.

Evidence of the possible impact the make-ready process can have on the construction of a fiber network is provided by FiberNet, a broadband provider that has deployed over 3,000 miles of fiber in West Virginia. The Company states that “the most significant obstacle to the deployment of fiber transport is FiberNet’s inability to obtain access to pole attachments in a timely manner.” FiberNet commented that its make-ready charges for several fiber runs in West Virginia averaged $4,200 per mile and took 182 days to complete, but the company estimates these costs should instead have averaged $1,000 per mile.

What causes delay’s in the make ready process? 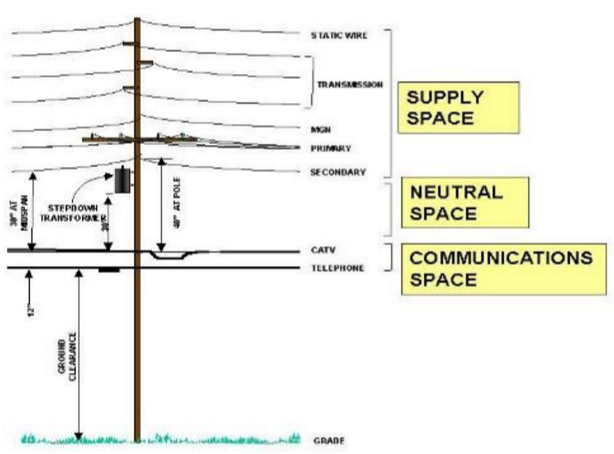 Two factors contribute to make-ready construction delays and the associated increased cost. One factor is that some, if not all, of the poles are owned by direct competitors – companies providing cable television, telephone, and internet services. While the Kentucky PSC regulates pole attachment agreements related to cost, it does not provide specific schedule guidelines for the make-ready process. Your competitors will not be in any hurry to help you build a network that has the potential to erode their business.

The second factor is the inefficient make-ready process used by the electric companies, telephone companies, and cable companies. This process has evolved over the years and is not coordinated by a central authority. Briefly, each individual company is responsible for making the rearrangements to its equipment and cables. Each individual company must dispatch a truck and crew and, in many cases, block the public rights-of-ways, streets and roads. The process can take weeks even months. Keep in mind, the network must be built before you can generate revenue.

What is the solution to reducing make-ready process time delays and increased?

The Fiber to the Home Council (FTTH) has released guidance on streamlining make-ready policies for pole attachments. The Council proposed that communities adopt “one touch” policies which would allow a single construction crew – with sufficient skill and experience to be approved and chosen by the pole owner – to complete all work to make a pole ready for a new attachment.

This one touch policy proposal will not only accelerate the deployment of broadband fiber but it will reduce the disruption and inconvenience to the community’s streets and roads. This policy makes the process more efficient for all providers, not just new entrants, to attach to existing poles.

In February 2016 Louisville Kentucky’s Metro Government was one of the first communities to establish a one touch make-ready ordinance based on the Council’s guidelines. As noted in this FTTH Council’s article, the Metro government appears to have a solid legal basis for its ordinance. The ordinance gives the pole owner the authority to pre-approve a list of one touch make-ready contractors and to inspect the work after it has been completed. Additionally, the make-ready cost are borne by the entity that has requested permission to attach to the pole. Louisville is fortunate in that Google Fiber is considering it as a candidate for Google fiber. This one touch make-ready ordinance will enable Google to reduce its network construction interval and allow it to begin competing sooner with the City’s existing providers.

AT&T has filed lawsuit against the Metro government on the grounds the ordinance conflicts with federal and state law and exceeds the Government’s jurisdiction. While the case is moving through the federal courts, Louisville is moving forward with implementing its one touch make-ready ordinance. The suit will test the rights of local municipalities to adopt rules to control the work done in their public streets and other rights-of-way.

Should your community’s governing body consider a one touch make-ready ordinance in preparation for building a FTTP network?

Terry Barnes has provided services for twenty-five plus years in the telecommunications industry. Terry’s experience with multitude of IT and Telecom infrastructure projects brings a wealth of knowledge to both Solarity and our customers. He has experience in planning, engineering, and maintaining telecom infrastructure. Additionally, he has many years’ experience as a software application project/program manager.

Most recently, Terry has been providing consulting services to the Lexington-Fayette Urban County Government (LFUCG) on their Gigabit City Project for the optimal selection for broadband access implementation.

We partner with organizations and individuals to help them go “from inspiration to implementation” by helping them to define the right work, plan the work, and work the plan.